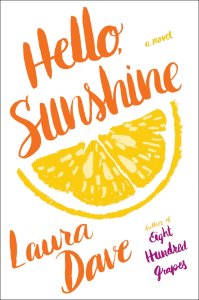 Sunshine Makenzie is a YouTube star, coming up in the world with a fresh cookbook deal and a Food Network show in the works. But when her twitter account is hacked and the hacker posts proof that she’s a fraud and has cheated on her husband, Sunshine’s world falls apart.

When her apartment is sold out from under her, she is forced to go to her last resort — her estranged sister in Montauk. Burned from the cooking celebrity world, she has to rebuild her confidence in herself, her friends and family, and the world to get back to what she enjoys. She makes some new friends — a burly fisherman, a chef with a Gordon Ramsay-like temperament, and her own 10-year-old niece, Sammy.

This is the classic story of a woman’s life falling apart, her losing everything, then fighting to regain some semblance of normalcy in the aftermath. But the unique part about this book is that it has lots to tell about the celebrity chef world — gaining a following, creating recipes, working in a restaurant, getting a cookbook deal and Food Network show.

I absolutely love watching Chopped, Beat Bobby Flay, Next Food Network Star, and the like, so I enjoyed the subject matter here. In fact, I read this entire book in one night, which doesn’t happen too often anymore! I originally picked it up because of the adorable cover and because I really enjoyed Dave’s last book, Eight Hundred Grapes.

Bottom line: Want a fresh, tasty read with a couple of spicy twists? Get this one to-go — you won’t be able to put it down until you devour the whole thing.

Tomorrow I leave for New York City! The main reason for my trip is to attend BookExpo and BookCon! I went last year and had such a great bookish time, and I decided I couldn’t miss out this year! Check out my post-BEA/BookCon 2016 blog here.

BookExpo is May 31-June 2 at the Javits Center in Manhattan. BookCon is June 3-4 at the same convention center.

However, I’m leaving early to go sightseeing around New York! I’m so excited to see the Big Apple. I’m planning on going to the 9/11 Museum and memorial, Ellis Island, the Top of the Rock, a Rockefeller Center tour, a broadway show, but most importantly, the bookish sites: The New York Public Library, The Strand, Books of Wonder, and more!

Though this isn’t a travel blog, I do plan on blogging every day to show you all what I was up to that day! As for the BookExpo and BookCon posts, I hope to show who I met, what I picked up from the show, and exciting things coming for the next year in the book industry!

Thanks in advance for following me on this new adventure! I’ll be blogging from a different time zone tomorrow night! And I can’t have a trip to New York and not end a post or two with the famous words from my current Netflix binge:

Have you ever been to NYC, BookExpo, or BookCon? Will you be there this year? What are some other things I should see while in the city?